This lesson explains how to use Paratext to correct spelling in the vernacular text.

You want to be sure that the translation teams are able to be consistent in their spelling of words in the translation. But you are told it isn't possible because of the complicated morphology. If they turn on the spell checker without proper configuration, it is quite discouraging to see all of the words underlined in red.

Why is this skill important?

You want the team to know how to correct spelling mistakes so that the text will communicate clearly.

What are we going to do ?

We are going to learn how to configure the spell checking so that it will be pretty good at indicating spelling mistakes by underlining them in red, as well as proposing corrections.

Before you can check spelling, it is important to have a number of words that are marked as correctly spelled. There are three steps to follow:

Approve the Spelling of Common Words

The Wordlist appears in a separate window. 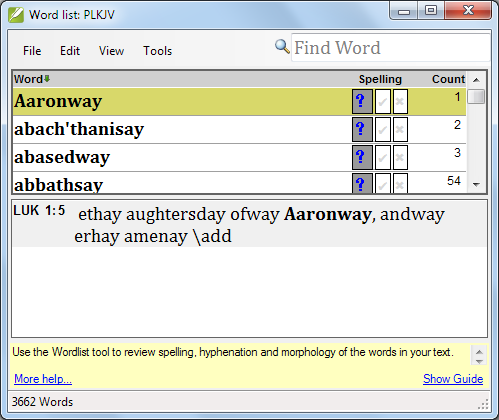 The default parameter is 100, but that is extremely conservative and won't result in much benefit for the spell-checking engine.

A dialog box appears that indicates the number of words that will be marked as correct.

Now the spelling status has been changed to “correct” for each of these words.

In the Wordlist window,

A progress bar is displayed. 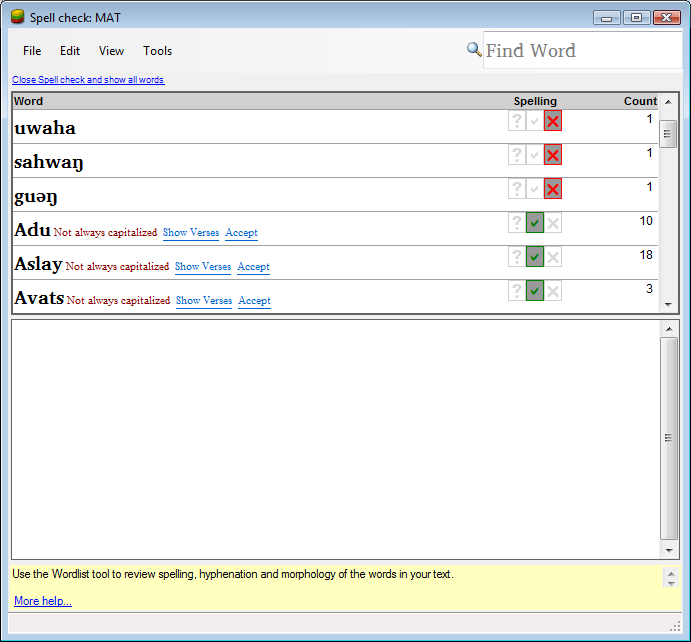 If the spelling status of the word is set to incorrect it is shown as below. You don’t have to do anything with this word.

If the spelling status is unknown it is shown as below (i.e. with a question mark).

You can set the status of the word as follows:

As more and more words are marked as either correct or incorrect Paratext is better able to determine the words which are suspect.

(for example the common typing errors)

Make sure that you have completed the previous setup tasks before activating the spell checking. Otherwise the majority of the words will be underlined in red.

In the main Paratext window,